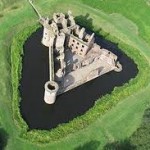 Caerlaverock is a proper castle, with a moat, and a very evocative place, well worth a visit. It’s owned by Historic Scotland and is free to members (Also for long term members of Cadw and English Heritage). You should find the guide book on the living room shelves.

Threave Castle – Formidible 14th Century tower on an island in the River Dee, accessible only by a small boat. If you’ve made the journey west to see the castle you should also visit Threave Garden…

Burnswark (near Ecclefechan) – Not quite a castle but Roman fighting camp earthworks and Iron Age hill fort. Great view from the top of the hill. 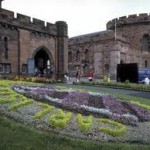 Carlisle Castle – over the border but worth the visit if you are in the city for the fascinating history, intact fabric from so many periods and informative exhibitions. This time run by English Heritage.

While you’re on the English side of the border, you might also want to visit Hadrians Wall – Housesteads and Vindolanda are both easy to reach.

Smaller ruined castles can be seen locally at Lochmaben and Torthorald.

‘The Devils Porridge’ at Eastriggs – An exhibition all about the often overlooked importance of Eastriggs and Gretna during the First World War when it was the location of a massive munitions factory employing 30,000 people, mostly women, from all over the Empire.

Churches, Memorials and a Monastery

The church in the village holds regular services and has a notice board at the gate with current details.

‘Little Dalton Kirk’ is an early church (some masonary dating back to the 14th Century) now ruined, a mile or so out of the village, left up the hill on the B7020.

Samye Ling – The largest Tibetan Buddist Monastery outside Tibet and a fascinating place to visit. Simple vegetarian cafe and organic plants from the monastery gardens.

Lockerbie Memorial – The memorial is at the far end of the cemetery just outside Lockerbie on the A709. An information centre ‘Dryfesdale Lodge Visitors Centre’ has been set up in the cottage at the gateway to the cemetery to try and give some context to the disaster. There is also a stained glass memorial window in the town hall at Lockerbie which incorporates the flags of every nation that lost people in the disaster.

Ukrainian POW chapel – On the route from Dalton to Lockerbie and preserved in the Nissen Hut where it was originally built, a testament to the faith maintained by the POW’s working the land in WWII.

Both Dumfries and Carlisle have pay and display car parks close to the town centres and both also run ‘time clock’ free parking on some side streets, you’ll find the manual ‘clock’ on the shelves in the living room, just set it to the time you arrived and leave it on the dash board where the parking attendant can see it. Don’t forget to return before the end of the time allowed – usually an hour or 90 minutes.

Glasgow and Edinburgh are both about an hour and a half away by car or you could catch a train to either from Lockerbie.